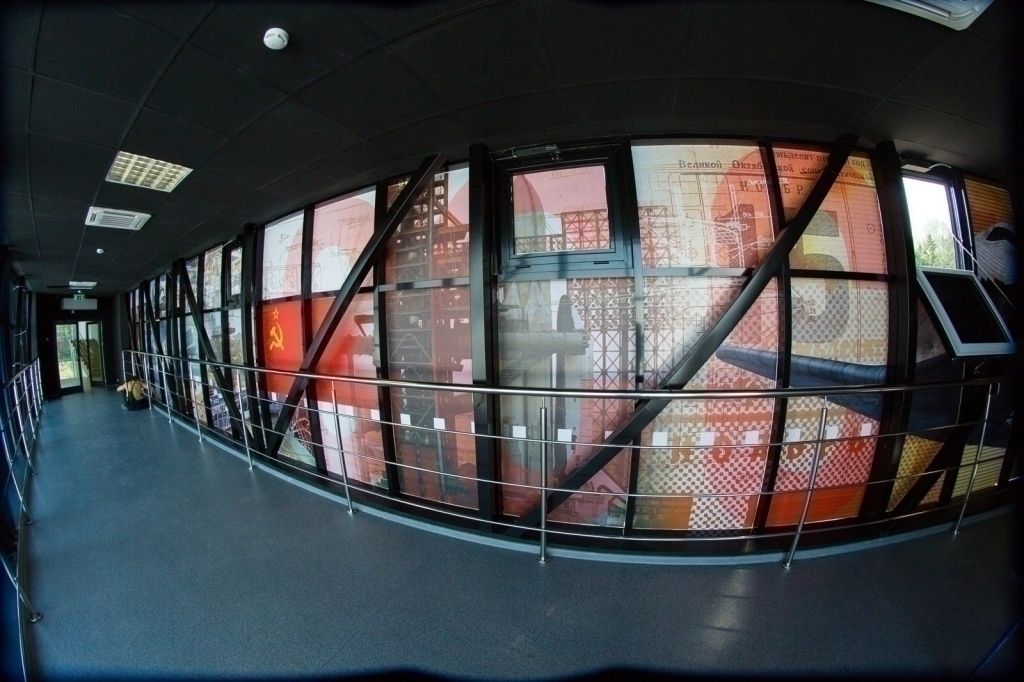 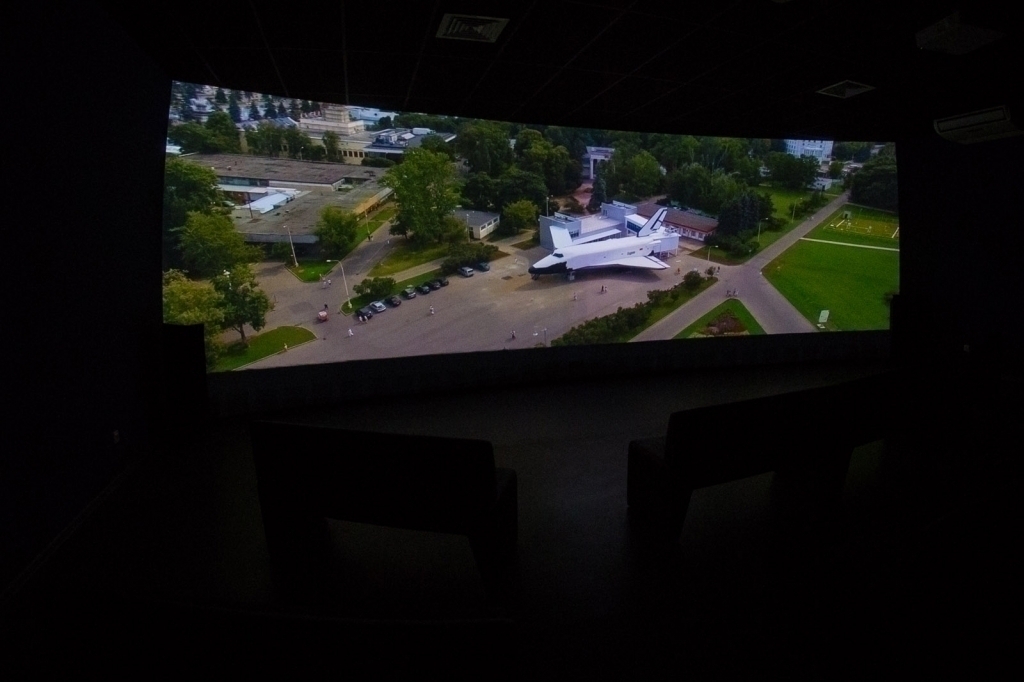 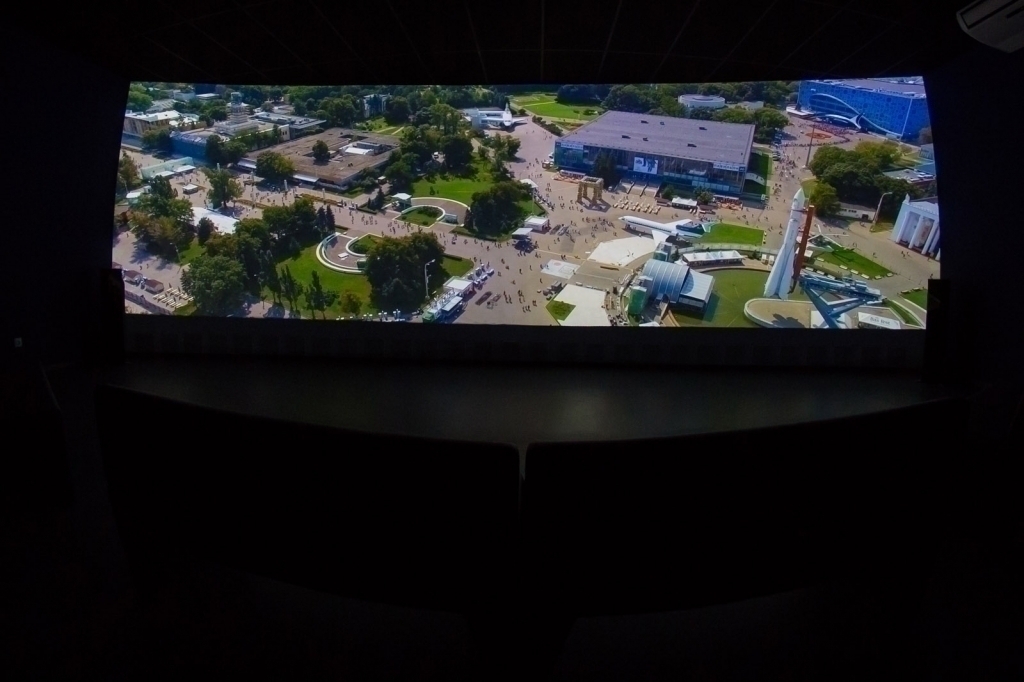 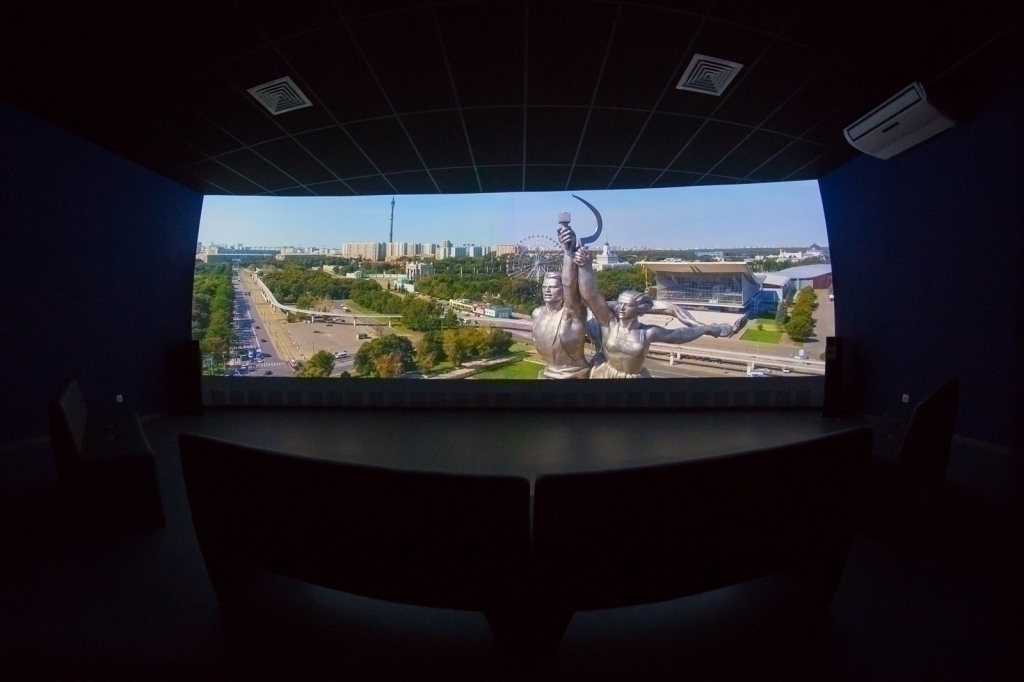 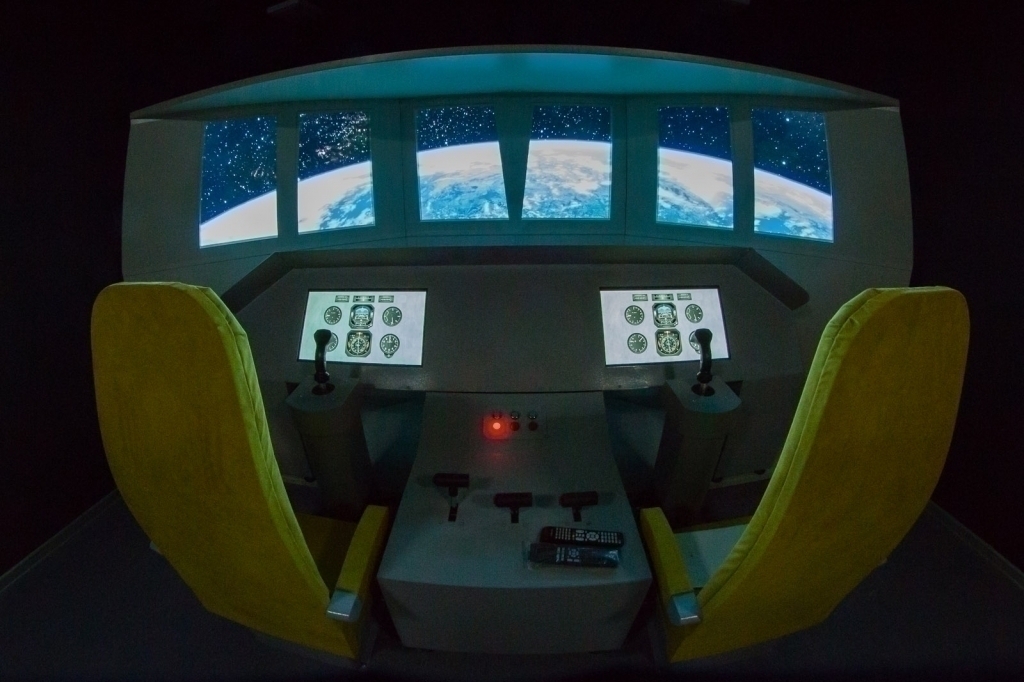 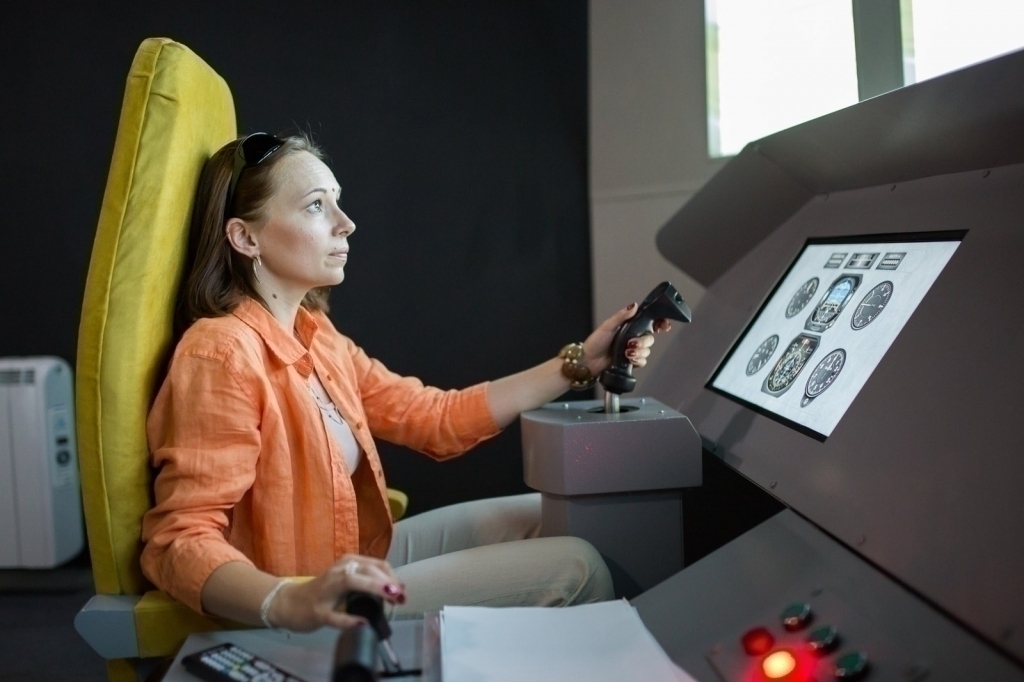 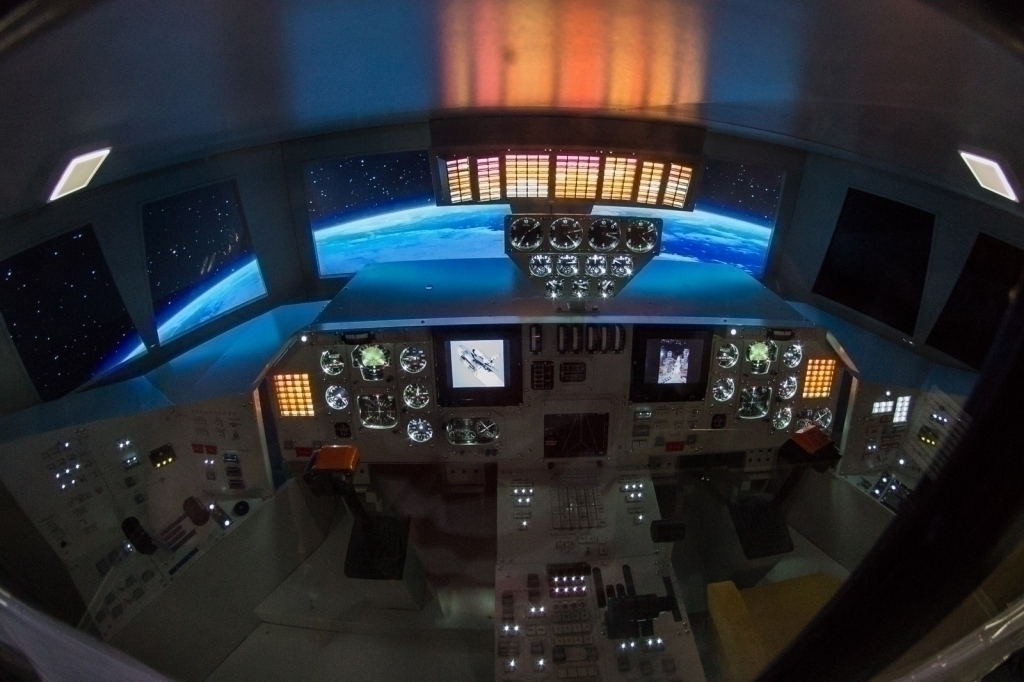 Interactive Museum of reusable space shuttle Buran is located inside the model of the orbital ship "Buran BTS-001", next to the pavilion #20. In the museum you can not only watch the film about the legendary rocket planes, but also control its landing at the Baikonur launch complex in real time mode.

The excursion trip begins in the cinema, where the visitors of the museum will be shown a film about the history of Russian space shuttle. The cinema is located in a separate pavilion built specially for this purpose in front of "Buran" model. The scale of the space project is amazing. The film tell about the creation of the "Buran", 12 years of work of more than 2.5 million engineers, designers and scientists working on 1,300 enterprises! For the construction of Buran 80 new materials were invented. Special ceramic tile on the skin of the rocket plane withstood the passage of the ship through the dense atmosphere and prevented it burning! The space ship literally came out of the fire safe and sound.

Then the visitors get inside the ship along the corridors resembling a transition sleeve from the spaceport to the board of the aircraft. Here they get familiar with the construction of "Buran" and its peculiarities.

Once on board of the rocket plane, the visitors will get acquainted with the history of "Buran": they have an opportunity to compare the American Space Shuttle and its Soviet counterparts - projects 305-2, OC-120, DC-92 and "Buran". The history of "Buran" is presented in details on special screens with touchscreen technology. You press the picture of the ship and more detailed information on the object of interest with all the pictures pops up on the screen. This technology is used in the London Transport Museum and Munich Museum of BMW.

The culmination of the tour is the visit to the bow of the ship where in the upper tier the command module of «Buran" with a dashboard and astronaut armchair is reconstructed. His role is played by a mannequin in a spacesuit of "Swift" type. On the lower tier of the bow of the ship the role of the pilot of the space shuttle can be played by one of the tourists! Here, the test pilots have a unique opportunity to land "Buran" at Baikonur launch site from the height of 80,000 meters. When landing the ship, you can see how rounded shape of the planet gets closer and closer. Blue expanse of the oceans is being replaced by a dark solid ground in Kazakhstan. After landing the plane, on left on the runway one can see the fighter passing by. The program fully emulates real landing of the ship on November 15, 1988.

After leaving the bow compartment of "Buran" the visitors are going back to the pavilion where the tour began and lasted 45 minutes by means of the glazed transition.
Please note that the access to the interactive museum "Buran" is only possible as part of a tour group of 16 people. The groups are formed every 20 minutes in the hall of the museum.

PLACE: The area near the pavilion #20.
TIME: Interactive museum complex "Buran" is open to visitors every day except for Monday, from 11:00 a.m. to 8:00 p.m. The Duration of the tour is 45 minutes. Visit to IMC "Buran" is only possible as part of a tour group of 16 people. Groups are formed every 20 minutes in the hall of the museum. The last group enters at 8:00 p.m.
COST: Adults - 500 rubles, children from 6 to 12 years, students and pensioners - 250 rubles, children up to 6 years old orphans left without parental care, the disabled, veterans and members of families with many children until the youngest child is 16 years old - free of charge.
ORGANIZER: JSC "VDNH"

Reference
The first and only space flight of orbital rocket-ship "Buran" was made on November 15, 1988. The spacecraft was launched from the Baikonur launch site with the help of carrier-rocket "Energy". The duration of the flight was 205 minutes; the ship made two turns around the Earth, and then landed at the Yubileiniy airport at Baikonur.
The flight was done without a crew in the automatic mode by using the onboard computer and flight software, unlike the shuttle, which is traditionally makes the last step of landing in a manual mode (entry into the atmosphere and decelerate to the speed of sound in both cases are fully computerized). This fact - the flight of the spacecraft into space, and its descent to Earth automatically running onboard computer was entered the Guinness Book of Records.
In the course of the work under the project "Buran" there were made several prototypes for dynamic, electrical, aircraft and other tests. After the closure of the program, these products remained on the balance of the various research institutes and industrial associations. A number of technical solutions obtained by the creation of "Buran" are still used in Russian and foreign space engineering.
In 1990 the works on the program "Energy-Buran" were suspended, and in 1993 the program was permanently closed. In 2002 the only "Buran" that went into space was destroyed at the collapse of the roof of the assembly and test facility at Baikonur, where the legendary rocket plane was kept together with ready copies of carrier rocket "Energy".
The full-size model of the orbital ship "Buran" was installed in the territory of Gorky Park in 1993 after the end of the actual test. For a long period it remained abandoned and was used as an attraction. In 2011, when Gorky Park the global changes took place the attraction in the "Buran" was closed.
In 2014, the model of the orbiter "Buran BTS-001" was moved to VDNH. The unique in the world transport operation took place on the night of 5 to 6 July. The main Russian space exhibit weighing 50 tons covered the distance of 15 km from Gorky Park to the Exhibition of Economic Achievements in 6 hours!
In the shortest time possible "Buran» was repaired and on its basis there was an interactive museum complex opened. Similar expositions using the model of the ship-shuttle already exist in NASA's Kennedy Space Center in the US, Speyerer Museum of Technology in Germany and at the Baikonur launch complex in Kazakhstan.

Venue
Макет космического корабля «Буран»
Cost
Adults -   500 Rub
children from 6 to 12 years, students and pensioners -   250 Rub
children up to 6 years old orphans left without parental care, the disabled, veterans and members of families with many children until the youngest child is 16 years old - free of charge.
Date
Schedule
Daily except for Monday
From 11:00 to 20:00