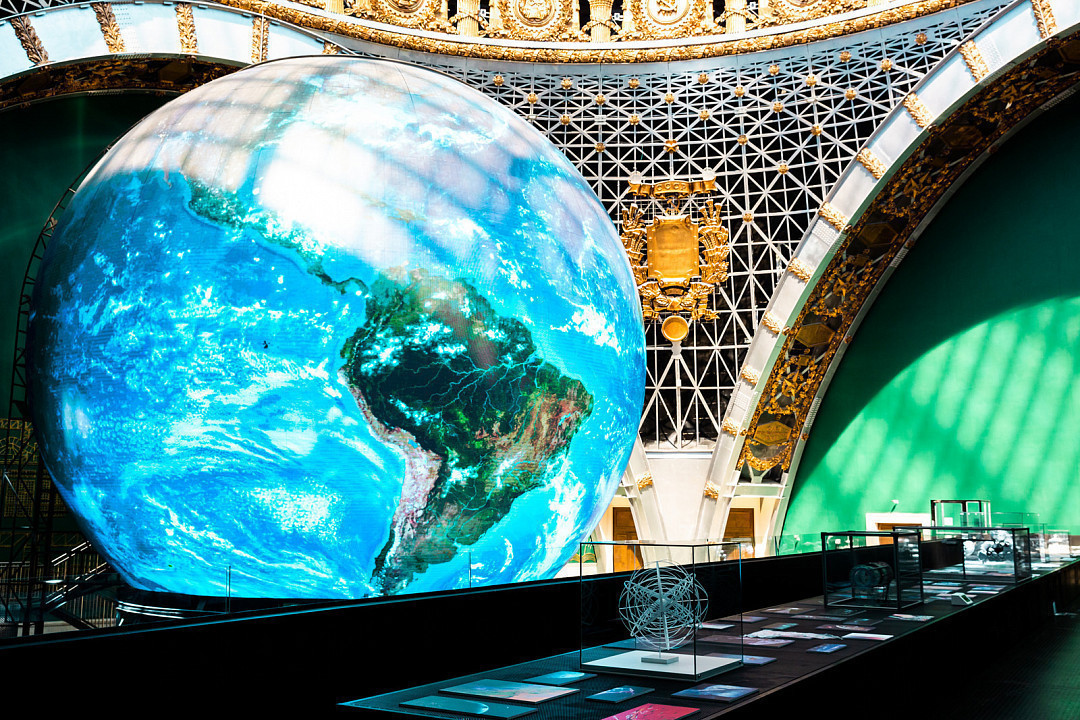 The Space Sphere cinema is the only interactive cinema of this format in the world, created especially for the Space and Aviation Centre at VDNH. From the outside it looks like a 16-metre multimedia sphere depicting the surfaces of the planets of the Solar System. Inside it is a modern 5D cinema, where visitors to VDNH can fly into space, following the path of development and conquest of the Universe.

The Space Sphere is located in the dome of the renovated pavilion—in the third part of the museum, called the Spaceport of the Future. The cinema is striking in its appearance and large-scale format. Since April 2018, almost every visitor has taken a selfie on the background of the shining planet. Now all visitors to the Centre have the chance not only to see the giant ball from the outside but also to enter the cinema.

Awaiting visitors of the 5D cinema is not only a film about astronauts, but also a real flight to distant stars and the centuries-long journey from the first gazes into the sky to our descendants settling in space. With the help of special effects and the use of most modern technologies, viewers can feel like true astronauts going into deep space. In just six minutes you can enjoy an incredible journey through the Universe, learn the history of the first space flights, take a walk on the moon in a special off-road buggy, go on a tour to other planets and watch the space house of the future being constructed.

The dynamic platform inside the cinema bends, vibrates, lifts and descends along with the film. Each movement creates the feeling of really being there and turns viewers into heroes—the conquerors of the boundless Universe.

The hall of the Space Sphere can hold up to 30 viewers during for each show.

HOURS: shows take place each hour from 11:30 a.m. The last show is at 9:30 p.m., the length of the film is six minutes.
ADMISSION: entry to the cinema through the main exhibition. You need to buy tickets to the main exhibition. Tickets to the cinema Space Sphere are purchased separately in the Space and Aviation Centre booking office. Ticket price: standard - 100 rubles, reduced - 50 rubles.
VENUE: Astronautical and Aviation Centre, Pavilion No. 34 Space.